Afte Herculaneum, we hopped back on the train and traveled to Pompeii, the more popular of the two archeological sites. When they handed me the map at the entrance, it was overwhelming how huge it is. As a result, we all discussed what we wanted to see most, and I steered us out to one far corner for the part I wanted to see most, Villa of the Mysteries (Villa dei Misteri). 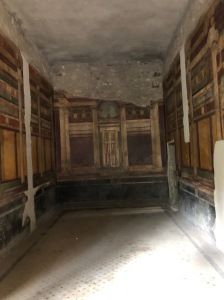 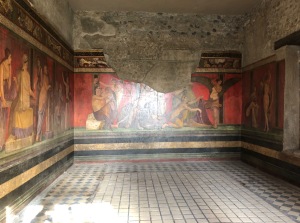 Villa of the Mysteries is named for the hall of the mysteries in the portion of the house that faces the sea. This too, located in the residential portion of the building, has a fresco covering three walls that is absolutely incredible. It is one of the most preserved ancient buildings, depicting a scene of Dionysus, who is on the middle wall, joined by Ariadne, his wife. Other scenes involve rituals as well as architectural details common in the art of Pompeii and Herculaneum. The building dates back to 200 BCE while the frescos are closer to 70 to 80 BCE.

After, the children wanted to see the amphitheatre, so we zig-zagged through the maze of buildings, marvelling at the ruts from carriages visible in the roads and the strategically placed stones allowing people to cross the streets, which were a good one to two feet below the sidewalks.

We passed some lovely mosaics in former front doors as well as the House of the Wounded Bear, which is mid-1st century AD. We also passed graffiti on the walls that remain from when Pompeii was in its hey day. The writing is political propaganda.

Mostly, we took photos of the amazing mosaics and frescos along the way. 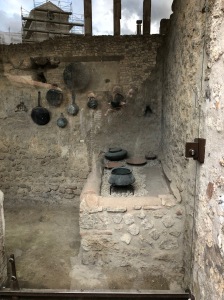 We also passed the famous “Guard Dog” mosaic, called that for the words below it (“Cave Canem”) that say Beware of the Dog.

One of the last ruins we walked through was the House of the Venus in the Shell. We really enjoyed the garden in the rear.

We basically wandered through the ruins until we finally reached the amphitheatre, sitting in the middle and taking in everything until we were absolutely exhausted and ready to head back to the train and Naples. 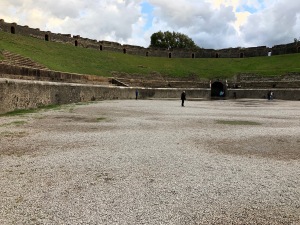 While I much preferred Herculaneum, Pompeii is another do not miss if you have the opportunity.