From Rock of Cashel, we continued driving west to County Kerry where we toured for two days. We stayed in a great Airbnb home near Kenmare and drove out from there. The location turned out to be perfect since we were situated right at the beginning of the Ring of Kerry, which is what we did on the first full day.

If you’re wondering what the Ring of Kerry is, it’s a drive actually. If you’ve ever driven down Highway 1 in California, it reminded me a little of that except it curves down through the town of Killarney as well as Killarney National Park. It’s a 3-4 hour drive (approx. 110 miles) of quaint Irish villages, forests, rocky coastlines, and a few sandy beaches along the way—and a castle or two of course. We really didn’t stop for any of the castles. We stopped more for scenic vistas than anything else.

Driving out from Kenmare, we set off mostly through the forest, though you could see the bay peeking through the trees. Not all of the drive was directly along the coast, which made for some amazing views with the pastoral landscape in the foreground.

From the beginning of the drive 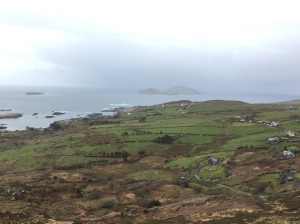 As we curved south toward Killarney, we stopped at the Gap of Dunloe, a rather narrow pass between MacGillycuddy Reeks and Purple Mountain. This amazing place was formed by glacial flows and where the Loe river now flows. We followed the GPS/SatNav until we reached a small cafe. We briefly stopped thinking we could drive no further. The weather had been rainy all day and it was still a bit drizzly when we arrived. There is a horse and cart for hire than can take you out along the small winding road into the Gap, but we didn’t take one. I will say that when we mentioned driving, the cart drivers told us not to even though we saw a lot of cars driving out from the road.

Looking back at Wishing Bridge

Since the weather seemed to be clearing a bit, we decided to chance it and drove down to a small lay-by on the other side of the “Wishing Bridge.” It’s said that wishes made on the bridge come true. I wish I’d known that at the time. We then walked around the bridge and took pictures before walking back to the car and driving a little further. Worried we might not find a better place to turn around, we turned back before the end and headed back along the Ring of Kerry towards Killarney.

Killarney is a neat town and we stopped in for a late lunch and to grab a few groceries for breakfast the next morning before we drove back through Killarney National Park, finishing the Ring. 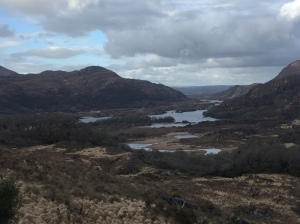 The park is a total of 25,425 acres and became a national park in 1932 when Muckross House was donated to the country. It is now a UNESCO Biosphere Reserve and a Special Area of Conservation as it contains the only Red deer herd remaining in Ireland as well as Sika deer which were introduced for hunting by the owners of Muckross house in the 1860s. We had one a Sika deer cross the road in front of us during one of our drives through the park. Thank goodness I wasn’t driving very fast!

The Ring of Kerry and Killarney National Park are definite must-sees for this part of Ireland. I wish we’d had more time to see a lot of the little bits and pieces we missed along the way.