For those who haven’t been, Bruges is lovely–and I’ve only seen a portion of it! Bruges is a combination of lovely old cobbled streets, well-preserved buildings, and waterways. The city centre is even enough to be made a UNESCO World Heritage Site and sometimes called “The Venice of the North.”

Historically, Bruges is first heard of in the 9th century and was probably first a coastal settlement, though by the 19th century it was a destination for well-to-do French and British tourists. 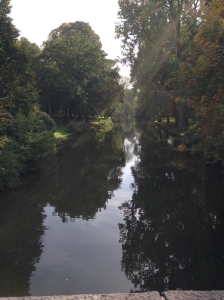 Crossing the first bridge into Bruge 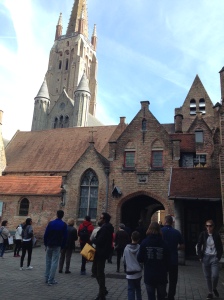 We left Mons with the intention of stopping in Brussels, but leave it to us to pick the one day of the year Brussels is closed to cars!!! Bruges was only an hour away, so we detoured in that direction since it wasn’t too far from the Calais. We found inexpensive parking at the train station and then with the help of a friendly local, we passed through the train station and in the direction of the city centre.

Bruges, in some ways a lot like the Netherlands, has bike paths, so make sure you don’t stand in them when looking to cross the street or you will have some rather angry locals and you might just get run over! 😉 My husband tried that before we ever crossed the first road.

From the train station, it was merely a matter of following the crowd, which led us into the centre, which is lined with quaint shops for tourists, selling chocolate, souvenirs, and beer, as well as restaurants. We passed several canals, but unfortunately, not all of my pictures were what I hoped they would be.

Mainly, we walked around the different streets and browsed in shops until we headed to the Church of our Lady for a tour. Now, if you are interested in touring this well-known church, you have to first go across the street to purchase tickets in the Old St. John Hospital. 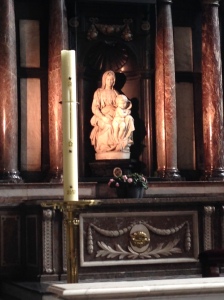 When you first enter, Michelangelo’s Madonna (1504) is in a small chapel just to the side. There are pews and such to a certain point, but barricades to keep onlookers back and a glass barrier around her to protect her (Can’t be too careful after the attack on the Pieta in 1972). If you aren’t familiar with this sculpture, it’s the one they focussed on in the film Monument’s Men.

Personally, I’m fascinated by Michelangelo’s sculptures. The serene, delicate expression on the face of this Madonna as well as Mary in the Pieta are beautiful. I had pushed for us to tour the church just to see her–not that she’s the only art treasure they have, but she’s the one I wanted to see the most!

Definitely walk all around the church, though! Don’t just stop at the Madonna. There are a lot of little lovely things about it. I particularly loved the remains of a fresco in one wall and how they had the crypts under the altar area open and covered for everyone to see the artwork detail in them. Definitely not to be missed.

After the church, we took a break for a late lunch, but ended up heading back to the Chunnel early and regretted our decision since it was booked solid. We ended up finding a beach in Calais so the children weren’t bored to tears waiting until we could enter the Eurotunnel station.

Next stop… Rome – starting with the Vatican!