During Jane Austen Regency Week several years ago, a group of us drove out to Winchester hoping to go inside the cathedral and pay our respects to Jane. Little did we know there is a flower show held ever other year at the cathedral and it was closed down the day we went to set up. I wanted to go again, but never made it back until this year. This year would normally be the year the flower show was held in Winchester, but I suppose the 200th anniversary of Jane’s death changed things a bit. Instead, the cathedral and all of Hampshire are celebrating Jane Austen.

I wish the weather had been cooler, but all of England was sweating out a heat wave for that entire week, and that Wednesday was no different. Intending to also go to the Mysterious Miss Austen exhibit, my daughter and I decided to go to the cathedral first since it was the closest. We stopped by the book bench in front of the cathedral first so I could snap a quick photo.

When we entered the cathedral, much to my surprise, my daughter was free because she is under 16 and with family. She’s at an age where she is rarely free or even reduced. She is still a student, so it’s always nice that something educational is made more affordable. 🙂

The greeters at the cathedral handed us a brochure with the best parts of the building labelled, and told us where to begin. Fortunately, Jane Austen’s grave is one of the first parts, though we had to wait for a tour to finish to actually stand close by. There are sculptures nearby and infographics that are well done and interesting, so we weren’t completely bored. Not to mention that the cathedral is beautiful and one of the most spectacular I’ve seen so far.

For people to leave messages 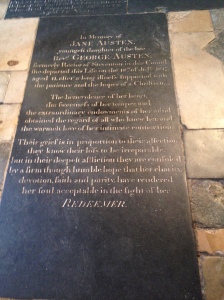 A book was nearby where fans of Jane Austen could write a note, and I contributed–even though I tend to struggle for what to write. One of the entries on the page was simply, “You changed me forever.” which made me tear up. Jane Austen changed the lives and attitudes of so many and she never knew the influence her words had. I do think she’d be touched, but find a lot of things in honour of her a bit of a lark.

Winchester Cathedral is definitely a must see from the amazing ceiling to the graves of kings and queens on a wall near the altar. I wish we’d had more time to spend, but we were to drive home that day and I had to be there by a certain time.

Remains of Kings and Queens

After touring the cathedral, I walked my daughter a short ways behind to show her the house where Jane Austen died. We then walked to the library for the Mysterious Miss Austen exhibit. For those interested, it’s not large, but confined to two rooms and free to the public. Jane’s pelisse is on display as well as the original watercolour painted by her sister Cassandra as well as several derivations of that work and another drawing I’d never seen before, but was not fond of. I’m sure I’m leaving things out, but those are the bits that stick out in my mind the most. 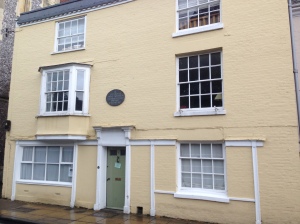 I was unsure if photography was allowed, and there was a very vigilant library employee watching everyone like a hawk, so I didn’t even try. I did find the exhibit to be nice, so if you’re in the area, definitely stop by.

Unfortunately, we were limited in time, so my daughter and I hurried to M&S for a takeaway lunch and started our long drive home. Thank goodness the M-25 wasn’t crazy with traffic!