The start of building of Middleham Castle can be traced to 1190, by Robert Fitzrandolph, 3rd Lord of Middleham and Spennithorne, and is best known these days as the childhood home of Richard III.

Located in Wenselydale (Yes, like the cheese.) in Northern Yorkshire, the castle is surrounded by a small village and the beautiful Yorkshire Dales.

In 1270, Middleham became the property of the Neville family (Earl of Warwick) and from what I can find remained their possession until the reign of James I when it was sold. The structure then fell into ruin during the 17th century and became what it is today, but the ruins are beautiful and a lot of fun to ramble around.

When visiting Middleham, there is no car park for the property, so parking is on the street, where permitted, and in the local car park. There is also no toilet/restroom facilities in the castle itself, so if you need the loo, then you must walk to the town’s public facilities as with six people we learned rather quickly. 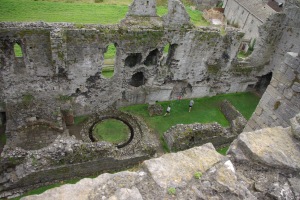 Down through the Great Hall to the Cellars 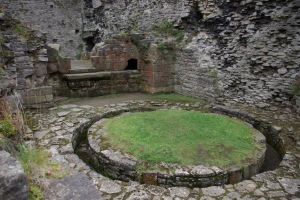 The castle appears compact from the outside, but is actually rather large when you go within the walls. The rooms were a good size, and there is a repaired spiral staircase that can take you up to the roof where there are some amazing views of the local countryside and give you an aerial view of some of the internal structures within the castle. 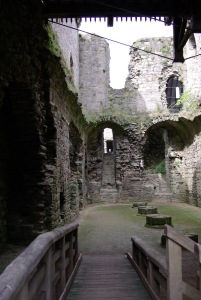 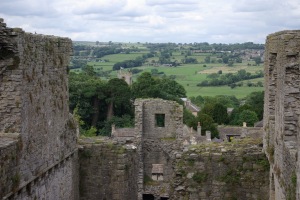 There are wells that can still be viewed as well as the old ovens in the kitchen and the remains of the old horse mill, which are really fascinating. The Great Hall can be seen from above as well as the cellars beneath due to the missing floor.

There is an English Heritage gift shop just after you walk through the Keep with the usual fare as well as a 15th century replica of the Middleham jewel that is on display for visitors to view.

I will say my children loved this castle. They tend to like ruins and places where they can run around, and despite Middleham’s age, it is a pretty good spot for that. Fortunately, mine aren’t so young that I have to worry about the steps, which would be of concern with parents of toddlers. 🙂