In my previous post, I went over the Alton portion of Jane Austen Regency Week and in this post, I shall cover the Chawton events and sights I was able to enjoy while in Hampshire.

It is very difficult to find anything on the history of Chawton prior to Jane Austen. The fact that she lived there from 1809-1817 seems to have taken over any search of Chawton history, yet the town is steeped in Austen whether a particular cottage housed a labourer who worked on Chawton Cottage, or you venture down to Chawton House to take a tour of the library and its gardens.

My first experience of Chawton was walking to the village for lunch prior to the walking tour I took on the first Sunday of Jane Austen Regency Week. We dined at Cassandra’s Cup, a quaint teahouse directly opposite Jane Austen’s house, and chatted until it was time for the tour.

Jane Hurst discussing the thatched cottage in the background

A Cottage in Chawton

The walk, given by local historian Jane Hurst, began at the underpass between Alton and Chawton and made its way through the picturesque village as she explained different aspects of the roads in the early 19th century and a multitude of cottages. Ms. Hurst is remarkably knowledgeable and able to quote Jane Austen’s letters when she explains the connections, giving you a more in-depth and personal look in to the occupant of the dwelling and their impact on Austen’s life.

We returned to Chawton on Tuesday when I was able to tour Jane Austen’s house. The experience for me was extremely moving–particularly her writing table. I could not help but take a photo of the table and her chair, but also the top, which has some small holes and is very dark, almost indicating a good deal of ink made it to the table itself. 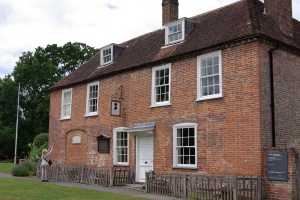 The worn and stained top

Tuesday night at the house was a special opening and tea service. Guided tours of the attic were given, and I was thrilled to be allowed inside a part of the house rarely opened for visitors. With the narrow and confined quarters and warped floorboards on the stairs, it is no wonder they do not open it on a constant basis.

View from the Attic Window

The unfinished portion of the attic

I must say that I enjoyed wandering the house and gardens. I found it rather surreal to look out of the windows and knowing that Jane must’ve looked out and viewed a similar prospect.

Pasture as you walk up the drive to Chawton House

My adventure with Jane Austen Regency Week ended on Wednesday morning, but I had not been able to see Chawton House, the home of Edward Austen-Knight, Jane’s brother, so I drove down and parked along the roadside. I could not resist the lure of grabbing my camera and taking a multitude of pictures as I walked down the lane–until I met up with the gate since the house was closed. Not to worry though! I will see it another time!