Have you ever heard of Lavenham? If you’re not from the UK, you might not. I hadn’t until I was searching through the National Trust guidebook for places to take the family. Even then, a guildhall did not really interest me as I thought it might, so I continued to pass it over for other attractions until the Trust sent out an email chronicling places of interest from movies. So, what was so special about Lavenham? Well, the Guildhall is the basis for the Potter’s house in Godric’s Hollow. 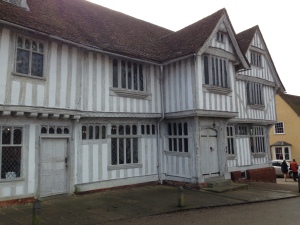 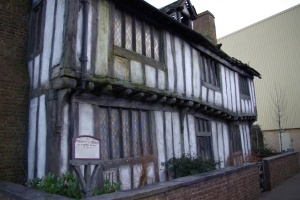 Yes, my family and I are huge Harry Potter fans, and once I found that tidbit out the Lavenham Guildhall was on the to see list.

For those who like me were unfamiliar with Lavenham, it was one of the wealthiest medieval villages in England with the Guildhall of Corpus Christi at its’ hub. The Guildhall was once believe to be several homes that were combined to form a centre for the Wool guild and eventually a meeting place for the town; however, because the foundation of the guild was based on religion, it was disbanded with the dissolution of the monasteries under Henry VIII and was later used as a prison and a workhouse.

Today many of the half-timbered homes in Lavenham remain crooked and leaning in some places into the streets. We walked around the town a bit just for the feel and enjoying the decent winter weather on the day we visited. The town is truly picturesque with the gently rolling hills that surround the quaint town. If it had not been for the cars and the modern clothes everyone wore, one could almost feel as though they stepped back in time.

We initially missed a turn to the Guildhall when we entered town, noticing the amazing church just along Lavenham’s edge, which we walked to once we had taken our time through the Guildhall and walking down a few of the small roads surrounding the town centre.

St. Peter and St. Paul’s Church was once probably a wooden church before it was built in stone in the 14th century. Like many of the cathedrals in England, it has been added to over the years, but none of the additions have detracted from the grandeur of this site. I think it reflects well the prosperity this community once had as it is such a grand church in a small village. 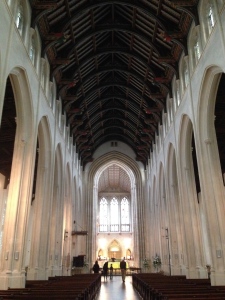 The exterior and interior of this building are just lovely and I found I enjoyed touring it as much as the Guildhall. The exterior has a great deal of Gothic detail to the architecture and I always enjoy the tall ceilings in the chapels. The columns and the different ceilings are all so interesting. Some have similar elements, but they are each unique in their own way.

Lavenham may not appear a great destination at first glimpse, but it is definitely worth an afternoon to walk around. I think I would enjoy returning in the late spring or early summer when everything is in bloom and it would be pleasant to take tea out of doors at one of the tea shops in town.