The day we toured Dover Castle and saw the cliffs, we had spent the day working our way down about a fifteen minute drive of coast in Kent.  We had toured Deal Castle in the morning, Walmer around lunch time, and our next stop had been Dover Castle.  Now, Dover Castle is high up on a hill and there is a bit of a narrow road through the property to get there, including a traffic light that alternates car travel across a very narrow one lane bridge.  My husband fussed at me because I was always rubbing one tire (or tyre as they spell it here) on the curb. He claimed he did not do it on our drive out, but I distinctly felt a tire rubbing the side!

According to the English Heritage website, Dover Castle has been protecting the English shores from invasion for over 20 centuries.  Prior to the castle structure that we now tour, the site was home to an Iron Age Hill fort and a Roman lighthouse (I somehow missed this.  Now, I want to go back!).  After the Battle of Hastings, William the Conqueror converted the fort to a ‘Norman earthwork and timber stockaded castle.’   The site was then used continually until 1958.

The castle that now stands was erected by King Henry II and his successors during the 11 and 12th centuries.  Unlike the Tudor castles that we toured, Dover has a ‘Great Tower’ that was a ‘palace for royal ceremony and to house Henry’s travelling court’ and that is exactly what English Heritage gives you.

Entering the front gate, you then walk up through another walled entrance with a drawbridge that protects the Great Tower.  The outbuildings are various museums, a gift shop, and a cafe, but the Great Tower that still stands in the center has been recreated to show visitors what it might have looked like just after completion when the court of Henry II received visitor Count Philip of Flanders, in 1184.  There are actors portraying the parts, holograms in certain rooms (There is one in the larder of men doing inventory), and things are set up to be walked through and explored.  The actors even rope the children into being knights of the realm in a ceremony.

(Some of the interior pictures were difficult to take without being blurry.  There is not a great deal of light, so I apologize for the quality on a few of the images.) 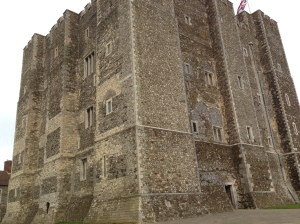 We went up the entire tower, which is by winding staircase, so make sure you have been doing your stairmaster!  In fact, the staircases bring you all over and through lots of long corridors, and even all the way to the roof of the Tower where you can enjoy amazing views of Dover, including the port, and the surrounding countryside. 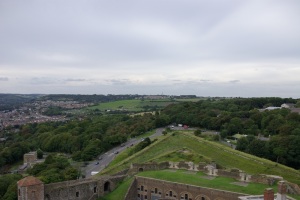 After making our way through the entire Great Tower, we exited out another gate with a drawbridge.  One of the first things we noticed upon exiting this gate was the enormous catapult that was standing outside.  As my family was checking that out, I began noticing the plaques on many of the buildings.  These all tell you the names or uses of the building and when it was built.  It is amazing to see buildings from as far back as the 12th century to as new as the mid-20th century, which shows how long this fortress was used as a defensive point. 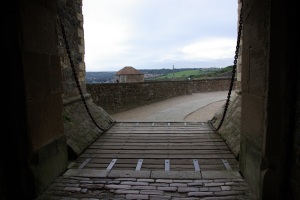 View back to the gate

There are underground tunnels that take you into the cliffs and an Underground Hospital.   Unfortunately, by the time we walked down to where the Underground Hospital had been, it had closed, so I am sure for safety purposes the remainder of the tunnels had closed as well since it was nearing 5.  I’m not sure about going into the tunnels as I am not huge on tight spaces, but it does sound really interesting.  Dover Castle was an integral part of the battle and evacuation of Dunkirk when the France was being taken over by Germany in 1940, and these tunnels give you an example of what those days were like as well as how the tunnels were used for barracks and other missions.

Our last stop of the day was the White Cliffs National Trust.  This site consists of trails and lookouts all along the cliffs.  We parked and set off looking for a place to see the white chalk cliffs and take pictures.  Truly, you do not have a long walk from the visitor’s center before you find a nice spot.  There are two trails for this. One takes you down so that you can take pictures with the cliffs behind you and the other takes you above and you can take pictures looking down at the cliffs.  I was a bit nervous because not all of the cliff edges have protective barriers, and I still have one rather young and impetuous child.  We stuck to the upper trail which seemed to have a bit more as far as the barriers while my husband kept him close.

The views were beautiful.  We could see France, the cliffs, Dover port, and we could also see Dover castle.  Clouds had rolled in by the time we went to the cliffs so France was not as easily discernible in the distance, but if you really look, you can see it.

The entire day was busy, but everyone had a great time.  I have to say that Dover castle was my favorite of the three castles we toured that day.  If you find you are in the area and must pick one, then tour Dover.  It is easily be an all day event as well.  There is so much to see and do at Dover, and because of time, we only scratched the surface.  I will always recommend packing a lunch too.  There are often places to picnic even if you bring your own blanket, and it is less expensive than eating in the cafe.  I have enjoyed the cafes, but we sometimes pack a lunch, which is much more fun in my opinion.  I also mentioned the stairs inside the Great Tower.  The hills around Dover are steep and high, so they can also be a chore to climb if you are not accustomed to them.  The cliffs were an uphill walk as well.   It was a wake-up to how out of shape I have become, that is for sure!

Next up….the sandy beach of Ramsgate.

One thought on “Dover and the White Cliffs”