Anyone who has read Pride and Prejudice has heard of Ramsgate.  It is, of course, the seaside town where Darcy set his 15-year-old sister, Georgiana, up with her own establishment.  The move proves to be a tremendous mistake when he discovers his childhood friend and son of his father’s steward, George Wickham, follows her there and with the help of his sister’s companion, convinces Georgiana to elope.  Darcy arrives just in time to save his sister from a man who was only after her dowry of £30,000.

Have you ever wondered what Ramsgate looks like.  What have you imagined when you read Darcy’s letter to Elizabeth Bennet explaining Wickham and mentioning Ramsgate.  As someone who has read Pride and Prejudice multiple times, I know I had a picture in my mind of the area, and it was nothing like what I discovered.

Ramsgate’s history goes back to 100 BCE with the arrival of a group of Belgic people, who were inhabitants of Gaul in those days.  After, there were arrivals and invasions by the Romans and later the Vikings.  Ramsgate’s earliest notation has it called Hraefn’s ate, meaning raven’s cliff gap, although, it later was called Remmesgate, Ramisgate, Ramesgate, and finally Ramsgate.

In the 14th Century it was known as a fishing village, but in 1483, it was adopted as a ‘limb’ of Sandwich and became a part of the Cinque Ports.  During the early 18th century, Ramsgate went through a great deal of cleaning and renovation followed by a quite a bit of building.  Georgian houses were built around the time Ramsgate became a busy garrison town and during Jane Austen’s time, it became a fashionable seaside resort.  In fact, by 1815, the region was so popular that there were steamboats on the Thames that took people to Margate, Broadstairs, and Ramsgate, which are all located on the same small peninsula.  There was even a train that connected these three towns so people could travel back and forth easily.

Deal from the top of the sea wall

The first thing you cannot miss when arriving along the beach at Ramsgate is that there is a sea wall–a huge sea wall.  Once you have parked along the seaside road, there are stairs that make the beach directly accessible.  There is a roadway that takes you down to the water level, but there is very little parking and it is no doubt more expensive than parking and taking the stairs down.  Ramsgate is a sand beach, unlike Deal, which is only a 20 minute drive.  It is still a very obvious resort area as the small stretch of beach we were on had two areas with vendors that sold ice cream and had various other beach paraphernalia.  There are no dogs allowed along the sand waterfront during the warmer months as well, which caused us to have to split time along the sand so someone was with our dog. 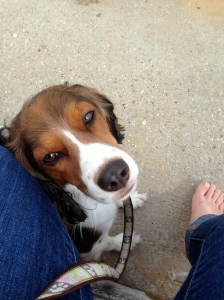 Layla waiting with me at the beach

Driving around Ramsgate is really interesting.  As we drove up one hill, I remember remarking to my husband that I felt as though I were in San Francisco.  Many of the houses are townhouses and attached on both sides like many in San Francisco and there are a few steep hills.  We also found homes that reminded us a bit of the French Quarter with their iron railings. 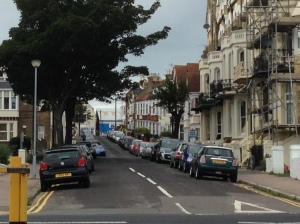 Looking up the street

I wish we had more time to explore as we had wished.  There is also the Italianate Gardens, which is a large glass greenhouse that was built during the Georgian era, and is supposed to be a must see.  I suppose despite the eye rolls I will undoubtedly receive, I will have to convince my family to return one day to see the gardens.

I apologize for the quality on some of the photos.  My camera battery died on me within minutes of arriving.  I took these photos with my phone.

Next up….I don’t know!  Whatever we do this weekend?

2 thoughts on “An Afternoon in Ramsgate”