We had to check out of our lodgings that last morning in Paris, but we tend to travel with backpacks just in case as well as the fact that most airlines in Europe only allow one free carryon. In this instance, we knew we would be walking around Paris on our last day with our belongings, so we didn’t want to be hauling luggage everywhere.

My husband found a gluten free restaurant called Noglu that had gluten free croissants and french pastries to try, so we walked there since we weren’t in any hurry, which allowed us just to look at a lot of the street views in Paris and enjoy the atmosphere. We had a couple of different views of the Eiffel Tower that we enjoyed walking to and from the restaurant. 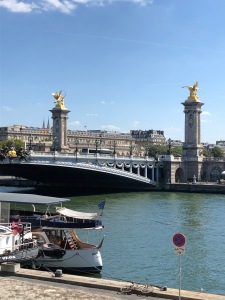 After our tummies were full and we had gluten free croissants and baguettes to take with us, we walked down toward the Eiffel Tower and crossed the Seine before walking back to sit on the steps of the Grand Palais and enjoy the view of it and the Petit Palais before we walked up the Champs Elysèe. We enjoyed looking in the stores and stopped in at the Disney store where my daughter bought a hoodie before we took the Metro to Gare du Nord. 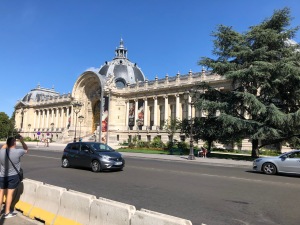 The check-in and customs process was a bit different returning from Paris than it was at St. Pancras in London and we were a bit early, which fortunately helped. Our return on the train was uneventful compared to my delayed trip to London. I did find it a bit jerkier and since the train was flying at pretty close to max speed, it felt a lot different. Overall, the Eurostar isn’t a bad way to travel, but it’s definitely more affordable when you can get the tickets on sale!

2 thoughts on “The Expat’s Travel Guide: Last Day in Paris!”