In my new book Unwrapping Mr. Darcy, Lizzy has a fluffy black cat named Grunt. I thought everyone might like to meet the inspiration behind Grunt, who is a little more mischievous than his real-life counterpart but was a lot of fun to write.

It’s been over a year ago that my husband decided my oldest daughter needed her own cat. We already had a dog and my second daughter had a cat so I was reluctant to take the leap. Due to my husband’s work, we move a good bit and moving a dog overseas was expensive. I didn’t like the idea of having to do that with a dog and two cats this time. In the end, he won out and the search began. Normally, I go to rescues for pets, but because of my husband’s job and how much we move, rescues don’t see us as reliable candidates to adopt in England. So, even though it wasn’t really the time of year for kittens, we started searching online.

About a week later, my husband drove my daughter a ridiculous distance to bring home this little black fur ball with grey eyes and a crazy whining meow she named Shadow. My oldest played with him and pampered him and as he became a part of the family, he turned the house upside down.

Layla, our dog, was afraid of him. She’d walk around him, but she doesn’t try to play with the cats at all. Flora, our other cat, decided he was an interloper and growled whenever he came near. We never let them be alone together until we were certain she wouldn’t attack him. She still growls at him from time to time but has never tried to hurt him.

As Shadow grew up, we discovered his adorable personality. He is the most loyal of cats. He likes me and the rest of the family, but he follows his girl all over the house. If she’s in her room, he’s in her room—unless someone opens a can of tuna in the kitchen (Even a cat has certain priorities!). If she leaves and walks to the living room, he follows—and I mean follows!

I have to smell!

He’s insanely curious and likes to sniff everything. When I’m in the kitchen, he’ll sit on the island and lean in for a sniff so I’ll hold out items for him to smell. He’ll sniff whatever you offer, too. What’s funny is when he doesn’t like it and he jerks back and crinkles his little nose. What smell has he hated the most? That’s easy! Mr. Etch black licorice markers.

So, what made me call him Grunt and add him into the book? Well, his quirks were so much fun, I couldn’t resist adding them into the story. I call him Grunt because sometimes when you pick him up, he groans. He’ll also make little grunting noises when you pet him, too.

Some of his quirks are a bit different than other cats, but in some ways the same. He is terrible about knocking over water glasses. We can’t leave any glass out or water will be everywhere. On several occasions, I’ve caught him trying to stick his head inside a glass, but he will also stick his paw in to lick the water off. He adores the kitty fountain we have. We also have a little fancy liquer glass my husband got in a gift set. That now sits on the kitchen counter, especially for Shadow. He’s the only one who drinks out of it and he will sit in front of it asking for a refill. 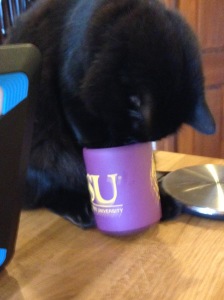 Did you think you could open a can of tuna without me?

What other characteristics does he share with Grunt? He will definitely meet us at the door just like Grunt. I don’t know how Shadow does it, but when we come in at night from swimming, he’s on the stairs by the door, sticking his little head through the bannister. If he’s in a willing mood, he’ll give us a nose kiss before we put down our kit. He also knows what time my daughter gets home from school. About 40 minutes before, he will wake up from his nap (usually in the dog’s bed) come downstairs, and sit with me. He’ll ask for pets and snooze while he cuddles until his girl walks through the door, then he races to meet her.

Unlike Grunt, he showed very little interest in the Christmas tree this year. We put plastic and wooden ornaments around the bottom because Flora will bat them off but we didn’t have any more than usual this year. I admit to being frightened when the tree went up. Shadow was fascinated by the lights and made me wonder if he might try to bite the electrical wire.

As much as Flora pretends to hate him, we find them playing together a good bit these days. They sometimes take turns chasing each other around the house, making a rumbling along the floor when they are upstairs. I suppose no one can resist Shadow, which is why I created Grunt! I hope you love him as much as I do when you read Unwrapping Mr. Darcy!

Now on Preorder at Amazon, iBooks, and Barnes and Noble for $3.99!