If you’ve never been inside King’s College Chapel in Cambridge, then by all means go! We made an attempt two years ago, but we were told they’d changed the viewing hours to one day a week at that time and we were unable to see inside. This time, we travelled to Cambridge for a Jane Austen exhibit in the library, but traffic had us arrive too late. Fortunately, the chapel was still open and we decided to do that instead. 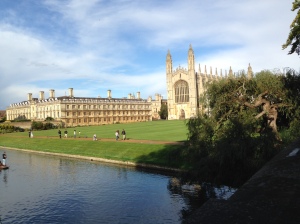 Chapel from the River 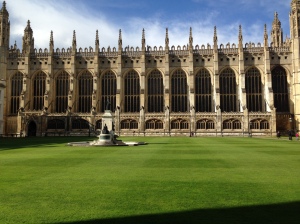 Side view of the exterior

Down the centre of the chapel

The initial building of King’s Chapel began on 25 July 1446 by Henry VI and took over one hundred years to finish. In the process, Henry flattened a good portion of what existed as Cambridge–houses, shops, and wharves–to clear enough land for the scale of the project. He wanted King’s College Chapel to be without equal in terms of its grandeur and beauty. There was supposed to be much more than the chapel by Henry’s plans. He desired more of a court, but he died before it could be completed, and despite instructions left in his will, only the chapel was built. 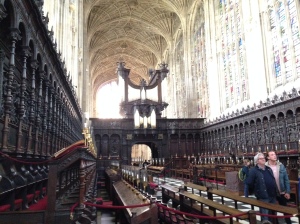 Looking towards the congregation from near the altar 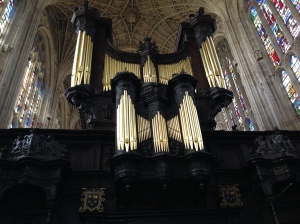 Pipes for the organ

King’s Chapel is an amazing example of Gothic (Perpendicular) architecture with the largest fan vault in existence. A great deal of the stained glass also dates to medieval times and if you look closely, you can see the difference between the older glass and the newer by the detail of the figures and faces. 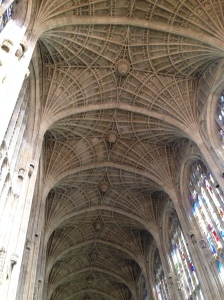 Rubens “Adoration of the Magi”

Stained Glass with the Fan Vault

Carvings in the wall are all representative of the Tudors, from the Tudor Rose to the dragons and the greyhounds on Henry VII coat of arms. The greyhound represented Henry’s mother, who was a Beaufort, and the dragon the Tudors while a fleur de lis is present to represent his “titular kingship of France.”

View of the river from the Bridge 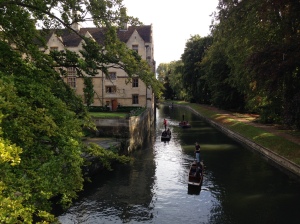 If you go, also don’t miss the Adoration of the Magi by Rubens on the altarpiece. The altarpieces in Europe have some amazing artwork and this one is no different. We also were able to walk the grounds after since it was an open day at the college. I definitely recommend it if you have the opportunity. Unfortunately, the other buildings are closed to the public.