Once we had our fill of Ghent, we drove the remaining way to Eindhoven, which is normally another 90 minutes or so, but took a bit longer due to some crazy traffic in Antwerp. We had a hotel just on the edge of the town centre, which was good and bad. Good because we weren’t in the heart of Carnival (I know someone whose hotel room window was by the deejay booth) but we still had a bit of the crowd and noise.

Not really the town centre. Just a street I liked.

So, if you’re interested in a nice quiet weekend in Eindhoven, don’t go during Carnival! Carnival is a Catholic tradition there and celebrates the last week before the fasting of Lent, much like Mardi Gras and other carnivals around the world. It’s a lot of crazy costumes, dancing and alcohol. People get loud, drunk, and they party hard!

We settled in and decided to wander around a bit and find a place to eat–always a bit of a chore in a different country. We walked around the town centre, which is a lot of shopping, restaurants, bars, and a pretty church before we did an internet search for a gluten-free restaurant. The site we used first wasn’t very helpful and most restaurants didn’t have options for us. Eventually, we tried a place called Vintage, which could make anything on their menu to suit us.

I must say with language barriers and such, I was a little nervous and I probably over-asked several questions, but the server we had was very nice about it.

After our meal, we walked back towards the hotel and had a good time watching everyone dressed in their craziest get-ups for the celebrations. Tents with loud music, alcohol, and crowds cropped up throughout the area. 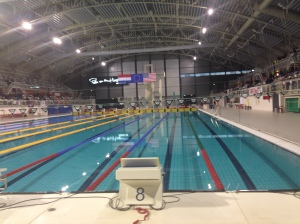 Our second day was spent mostly at the National Swim Centre, which is an amazing place if you’re into swimming and pools. It’s a beautiful facility and was fascinating to wander around when we weren’t busy.

After our busy day, we were certainly hungry, so we drove back to the hotel. I messed up a bit and I’m still waiting for someone to mail a ticket to my house since then! I missed the little side path for the car and ended up in a bus lane then I got stuck behind someone making a left turn, which made me run a red light. Hopefully, there were no cameras! 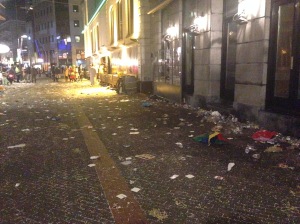 This was nothing! There was worse!

More of the aftermath

That evening, we wandered through the now filthy streets in the town centre to find another restaurant. Our problem this time wasn’t finding a place that was gluten-free so much as finding a restaurant that had room. All of them were packed!

Finally, a really nice gentleman at Ilios found us a table. I love Greek food and this place didn’t disappoint. The manager/owner spoke very good English and was so nice, even apologising for the slower service when the small restaurant was packed to the gills! The service, in my opinion, hadn’t suffered at all.

Once we’d eaten, we wandered around the streets a bit, but people were rowdier and the streets were truly gross with beer bottles and garbage, so we headed back to the hotel to sleep.

The next day we woke to our last day in Eindhoven, we swam, and we made our return trip to the Eurotunnel in Calais. The trip back was without any traffic and the weather was decent. We made it to the Chunnel about an hour and forty minutes early for our scheduled train. We were offered an earlier train, made it through customs, and when we were through, it said that our train was preparing to board, so we drove through the maze and onto the train. We didn’t discover until after we were packed in like sardines that it was the train before ours. I suppose they have plans in place for that because we had no issues and we paid nothing extra. We just ended up back in the UK 30 minutes before we were supposed to. I wasn’t upset about that at all!

Just for laughs, me swimming. Not a pretty pic!