We were looking for something for the kids a few weeks ago and I found this exhibit at the Horniman Museum for their Robot Zoo. Deciding to make a day of it, we decided to take the train since the tube ride was considerably shorter from the train station than the outermost tube station and the train is faster into London.

We made a late start and had a bit of fun navigating other trains to get to London since we missed the direct service, but we made it in and took the over 40 minute tube and London Overground ride to Forest Hill. It’s a neat part of town. A suburb really of London and was a fun one mile walk uphill to the museum. Now, there’s much more to the museum than just this Robot Zoo, but due to time and weather this time of year, we didn’t do everything the Horniman had to offer.

My children wanted to see the Robot Zoo and the Aquarium, so we paid for the two together as the rest of the museum is free. The Robot Zoo is downstairs and really in one large room. There were several animal “Robots” set up around the room, built to show and kind of explain different physiological features if you read the bits that go along with each. For example, Giraffe’s have a series of valves in their neck to prevent them from passing out from blood loss from raising and lowering their head, so the robot version had a series of valves as well. There were also other activities that went along with each animal featured. 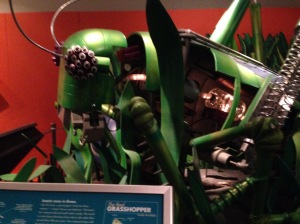 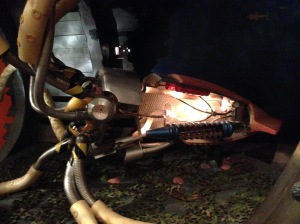 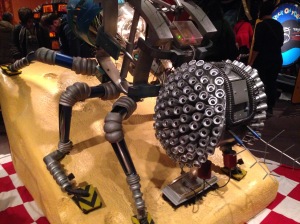 The robots were colourful, imaginative, and interesting. I will say my youngest, at 9, is probably on the line to being too old for this exhibit. Most of the children there were quite young. It’s really geared towards younger children and while my 11-year-old did seem to enjoy herself, but said she would’ve preferred to stay at home with my eldest.

We then ventured down another level to the Aquarium. My children enjoyed the poison dart frogs, but the exhibition is actually rather small and I found it disappointing. It didn’t take long to wend our way through the tanks and make our way back upstairs. 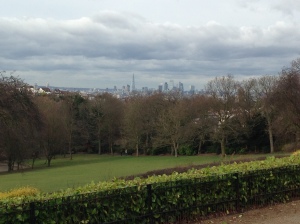 We walked through a portion of the natural history museum, but my children were beginning to complain of hunger and how they wanted to leave, so after a quick walk through a small part of the gardens (which has a great view of the London skyline, by the way!) we called it a day. We took the Overground and the tube to Borough Market and ate at a seafood restaurant right in the shadow of a neat old church, walked about Southwark, crossed Millennium Bridge, and from St. Paul’s walked to the tube to return to the train station.

After a quick trip to Platform 9 3/4 and a Hotel Chocolate store, we took the train back home!

The Robot Zoo runs at the Horniman through 29 October 2017.

2 thoughts on “Horniman and the Robot Zoo”