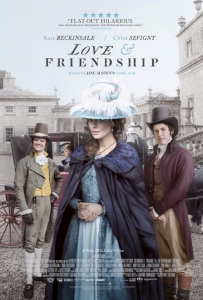 To be honest, I don’t know how to give a specific rating for this movie. I keep thinking of Robin Williams in Dead Poets Society saying, “How do you rate poetry?” I’m not saying this movie is poetry, but it’s just something I can’t assign a specific number of stars.

That said, I liked Love and Friendship, though I’m not going to claim it was a flawless masterpiece. I had bits I liked and bits I didn’t. As a Janeite, little things sometimes bug me, and it would seem like a trifling with this movie, but there were a few little things.

I’d watched the hubbub when Love and Friendship hit theatres and watched the trailers, eagerly awaiting its release on DVD. My husband added us to the waiting list at the library when we had word they would have it. We were  the first to check out the copy.

Now, one of the first criticisms I heard of Love and Friendship from others was the costuming. I read someone complaining that the characters were wearing Georgian gowns rather than Regency. Most historian’s or Janeites, have a time period in which they associate one of Jane Austen’s works. Lady Susan is believed to have been written in 1794, and I would imagine the artists and fashion designers were attempting a late 18th century look rather than the look we associate with Regency, which began in 1811. Fashion plates from 1794 do feature the more Regency-looking empire waistline gowns, but there are Robes a la Anglaise dated to this time period as well. I suppose, they wanted a consistent look to the movie rather than some wearing more modern gowns versus the older styles. Overall, the costuming was lovely, and to be honest, I didn’t have an issue with it.

My only criticism before watching the movie was the title. The movie Love and Friendship is taken from Jane Austen’s epistolary (in letters) novel Lady Susan, who is Kate Beckinsale’s character in the film. What bugged me about the title change is that another of Jane Austen’s juvenilia is called Love and Friendship, and bears no characters in common and no similarity other than it also being in epistolary form. Try to look up Jane Austen’s actual story online these days, and you get a plethora of posts about the movie rather than the book. Grrr! 🙂

Regardless of my gripe with the title, I still really itched to see this movie, and I did enjoy it. I thought Kate Beckinsale was delightful as Lady Susan and I really loved Chloe Sevigny as her great friend and American (gasp!), Alicia Johnson. The two of them played brilliantly off the other and the quips about Mr. Johnson (Stephen Fry) sending her back to the wilds of Connecticut or having a more severe case of gout next time were really amusing.

However (Oh, come on! There had to be a however!), I found the flow to be choppy. Scenes were started and sometimes they felt like they were cut too soon, or the one-liner was delivered so the scene was over. My husband even commented about half-way into the movie that it seemed to be nothing but a series of one-liners.

I will also say that my husband, who is not a Jane Austen fan, but agreed to watch this for me (Who am I kidding! More to watch Kate Beckinsale!) became quite confused as to some of the characters. I don’t think he really grasped who Lord Manwaring was at the beginning which caused him to ask questions when the Manwaring’s names were brought up later in the film.

For those who are Jane Austen fans, I would say go and watch it to decide for yourself. I would never say watching it was a waste of time. I enjoyed it. But I won’t go running out to buy my own copy. As much as I love Jane Austen, I think I will wait and see if a version I like better is released.

Have you watched Love and Friendship? If so, I’d love to hear your thoughts!

6 thoughts on “A Review of Love and Friendship”