From Edinburgh, we drove down and stopped in Durham to visit a friend. For those who may have never heard of it, Durham is a beautiful city steeped in history. It is a UNESCO World Heritage site due to the cathedral and the castle. Archeology gives evidence that Durham has been a settlement since 2000 BCE, so it is definitely deserving of the title World Heritage Site.

Once we met up with my friend, Jude, in the market square, we followed her up the hill to the cathedral. We had tea at a lovely tea shop where we could sit outdoors and enjoy the scenes of not only the cathedral on one side, but the view of the castle up the hill on the other.

We took a tour of the cathedral, but unfortunately, photographs are not allowed inside, so I cannot show you my own photos of this spectacular building. You’ll have to look it up online and find some yourself. 🙂

After spending a few hours in Durham, we finished our trek to Yorkshire. We stayed in a small village near the town of Ripon, which was a neat place and afforded us the opportunity for any shopping we might need.

The Dales are a good bit like the Peak District. It’s a beautiful area with a lot of scenic views, though the roads are narrow and bordered by rock fences–again like Derbyshire. 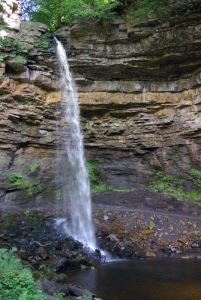 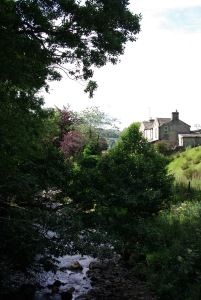 On the walk back

Hardraw Force is reputed to be England’s largest single drop waterfall with a fall of 100 feet. It’s on privately owned property, so once you find the little village of Hardraw. The parking is hidden behind the Green Dragon Inn. You pay and enter through the little ice cream parlour and from there it’s a short walk. If anyone finds the spot familiar, it was used in the Kevin Costner version of Robin Hood. It’s where Maid Marion sees him bathing/swimming. 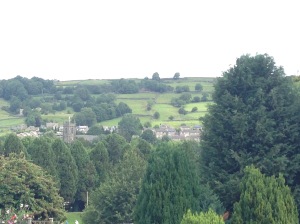 Lastly, Pateley Bridge is a lovely little village/town nestled in a valley in the southern part of the Dales. It is picturesque, quaint, and boasts of the oldest sweet shop in England–of course, we had to stop in! We spent the day roaming the town and ate at one of the local pubs. I will say that the food in the north was mostly the same, but amazing. We were so impressed.

Next stop…Fountains Abbey and Studley Royal

2 thoughts on “Durham and Yorkshire”