Chatsworth was first built in the 16th century, but the home we are all so familiar with was when Chatsworth was re-built by William Cavendish, 1st Duke of Devonshire in 1696. Over time, the original structures were added to, and the North Face of the structure was altered by the 6th Duke of Devonshire in the 19th Century. All of the little renovations and additions over the centuries have culminated in one of the grandest homes in England.

The drive alone to reach Chatsworth is a scenic one since the property is in Peak District National Park. The countryside is beautiful, and the villages and towns are all old and quaint. As you enter the grounds, there are several old stone bridges which are one way, either you must watch and wait or there is a traffic light indicating when you have your turn; however, once you reach Chatsworth from the other side of the River Derwent, it cannot do anything but hold your eye.

Since I am exceedingly cheap and did not want to pay for parking, I purchased our tickets online a few weeks prior to our trip. There is a large car park to the left of the house, but we were ushered into the overflow parking in a large field between the front of the house and the river.

One thing I will say about Chatsworth is that the employees were some of the nicest people! When we began to approach the house, a woman at the gate gave us detailed information about the different places for us to get the children a snack and then after, she was in a different position, but directed us to the correct counter once we entered. It was preferable to waiting in the queue! 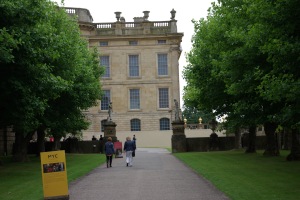 Up the side to enter 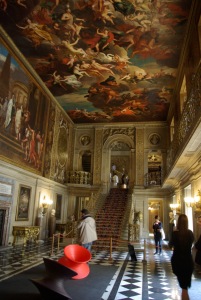 Ceiling from the top of the stairs

From the entry point, the house is roped off in such a way that you follow the path through the house for the tour. After passing through a corridor, you are taken to the Painted Room–the entrance hall in the 2005 Pride and Prejudice. In my opinion, while it is amazing in the movie, it is more incredible in person. The marble floors and the paintings covering the walls and the ceiling are breathtaking. There are also diagrams that tell you the identity of all the Greek deities on the ceiling. There are painted ceilings in quite a few rooms, when you tour this house, so always look up when you enter a room! You don’t want to miss any of the artwork!

Floor in the Painted Room 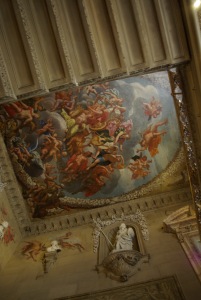 Ceiling of the main stairs

After the Painted Room, the tour progresses through rooms built in the event of a royal visit. All have painted ceilings and ornate furniture with dark panelled walls. These rooms were interesting, but I did not enjoy them as much as the remainder of the house. The rooms that had authentic Georgian era chinese wall fabrics and were more likely family bedchambers and rooms intrigued me more. 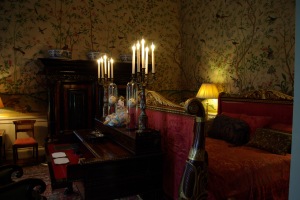 The library is huge, and unfortunately, roped off, but the door is left open for the public to see inside.

And then there is the artwork!!! Portraits by Gainsborough and portraits of Georgiana, Duchess of Devonshire, George IV as well as others line the walls. Then there are the sculptures. My favourite was the “A Veiled Vestal Virgin” (Raffaelle Monti, 1847) who is near the library as you’re walking through. I heard people asking the guides posted throughout if the entire sculpture is marble and even had someone who looked at me amazed when they commented, “It’s all stone!” It is a marvel that the artist managed to give the detail of her face through her veil, and my favourite part of the piece.

The sculpture gallery is the last room of the tour and incredible on its own. I was already familiar with Neoclassical sculptor Antonio Canova, who has several sculptures in this room, as well as replicas of his work sculpted by the master’s students (the lions). The room is beautiful, and I have to say that I spent a good twenty minutes to half-hour going through the room piece by piece, taking photos and studying the works.

Of course, every house you tour has a gift shop, but what’s special in the Chatsworth gift shop? You can take your picture with the sculpture of Mr. Darcy (Matthew MacFadyen) from the 2005 movie. Did I take my picture with him? No. I did take a photo of him, and get a giggle over the sign asking ladies not to kiss Mr. Darcy. 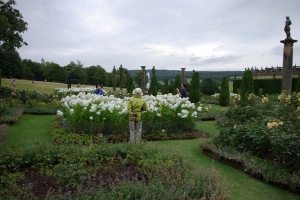 Garden near the house 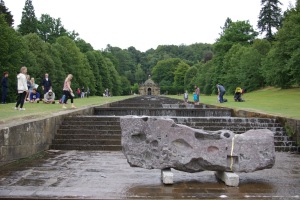 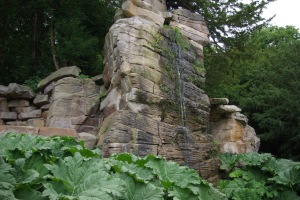 Waterfall in the rock garden

I wish I could say that we were able to go through the entire gardens, but the day was one of those misty at times and drizzly days. Other than a few drops, we managed to avoid a lot of the rain as we looked, but my children wanted to go to the play area before everything closed, so after viewing Paxton’s rock garden (by the Paxton who designed the Crystal Palace), the maze (yes, there is a hedgerow maze), and a few of the conservatories and the cascade, we left the house for the playground.

At the end of the day we set up our picnic blanket at the edge of the River Derwent, but that was when the heavens opened and the rain began falling more steadily. My husband did pull over as we drove out so I could walk into a field and take one last picture.

One thought on “Chatsworth”