Are the characters in your favourite novels only fictional places in someone’s mind, or is there a corresponding place or inspiration? I am beginning this new installment as a way of allowing you a bit of insight into my mind, as long as you aren’t terrified at the prospect! 😉

Today’s post gives you the inspiration behind the names of the modistes in my novels. If you’ve read historical fiction, then you are likely aware that a modiste was a dressmaker. Women made appointments with the modiste and then searched through fashion plates as they made their orders. It seems many authors use French names for the women in this occupation, and I followed that trend; however, rather than make up names, I derived their actual names from French female artists.

Just to give a bit of history, until the 20th century, women often were overlooked as artists. Mediums common to women (watercolor, paper cuttings, etc.) were classified as craft rather than fine art, and their was even a hierarchy of genres, which, believe it or not, was a list of what paintings were considered more important than others. This list made it even more difficult for women to succeed in painting. 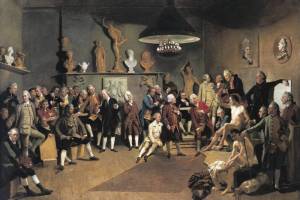 The Academicians of the Royal Academy, London. 1771-72 Johann Zoffany

For example, the most respected form of painting was histories. If you consider that genre, these included mythology, religion and allegories. For centuries, women were not allowed to study the human form (primarily the male nude form), so how were they to paint these scenes without the proper training and study? In this portrait of the Royal Academy, painted in 1771-1772, the members of the group are sketching a male model. Two women belonged to the Royal Academy during this time, but if you’ll examine the painting closely, they do not appear at first glance; however, if you look closer, you will see both Angelica Kauffmann and Mary Moser are in portraits hanging from the wall behind the model. Women were mostly relegated to the periphery as far as training and recognition.

Just for reference, this is a listing of the hierarchy of genres to let you know where these women made their names.

I see the use of their names as a subtle nod to them and their work. So, without further ado, please allow me to introduce you to the artists. 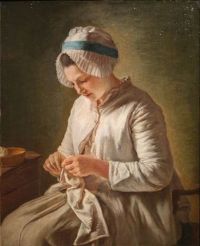 Daughter of sculptor Antoine Duparc, she did not become well-known, even within her own country of France, until the beginning of the 20th century. Duparc did not sign or date her works, so many of her paintings are unknown with the exception of four paintings she bequeathed to the Musee des Beaux-Arts in Marseille. The works she is known for are all “genre portraits.” 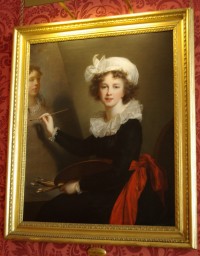 Élisabeth Vigée-Lebrun found amazing success during her lifetime as a court painter for Marie Antoinette. A child prodigy trained by her father, over a ten-year period, she painted 30 portraits of the French Queen. She even painted several famous depictions of the monarch with her children prior to the French Revolution.

Due to her fear of the coming revolution, she fled France with her daughter in 1789 and traveled to Austria, Czechoslovakia, and Germany, painting the nobility and aristocracy, before travelling to Russia, where she remained for six years again painting portraits of the aristocracy and the Russian royal court. Prior to her permanent return to France in 1805, she spent almost two years in London.

The painting shown is a self-portrait. I recently had the privilege of viewing a copy she painted that hangs at Ickworth near Bury St. Edmunds. It is a stunning work! 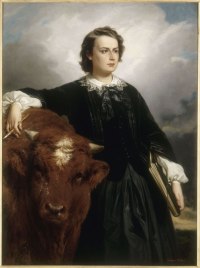 Rosa Bonheur, like many early female artists, trained under her father, and by the age of 23, had already exhibited 18 works in the Paris salon—an impressive feat for a woman during that time, especially considering her subjects were animals sometimes within a landscape.

Bonheur separated herself by not only being an artist, but by her research. She was known for frequenting the slaughterhouses where she studied in-depth the anatomy and musculature of the animals she painted. It was said she even had a license to wear pants (Yes! She had to carry a license just to wear trousers!) since it was impractical to wear skirts as she made her studies.

The painting below, Le Marché aux Chevaux (The Horse Fair) established her within the international art community, and even provided her the opportunity to tour London with the work.

I hope you enjoyed this little foray into my thought processes and perhaps gives you some inspiration to learn more about one of these amazing women. If you have a favourite French artist, then please tell me in the comments below. If she fits, perhaps I’ll use your suggestion the next time I require a name!