In eastern England, there is a swamp region called “The Fens.”  The Fens are the lowest lying region in the United Kingdom with some areas below sea level.  Roman hydraulics and medieval drainage methods have been discovered in this region but the modern draining of the Fens began in the 1630’s, resulting in what is now reclaimed farmland.  This stretched over portions of Suffolk, Norfolk, and Cambridgeshire.  When driving certain roads in this area, the roads are built up from the farmland with large drainage ditches on the sides of the road, some as much as 15 to 20 feet deep.  They have had cars run off of the road and not be found for a few days because of the depth of the water.  In recent years, due to flooding and preservation, some areas have been allowed to revert to their previous state.

Wicken Fen is the oldest nature reserve that is run by the National Trust and they claim it is England’s most famous Fen.  It is considered one of Europe’s most important wetlands and supports 8500 species of plants and animals.

Anyone interested in Wicken Fen should always bring a pair of Wellies (rain boots).  We learned this the hard way.  Since the weather in the UK is unpredictable, you never know when it will rain and since you’re visiting a swamp, it is likely to be muddy anyway.

That said, the area is very pretty with a main boardwalk, plenty of trails, and blinds for the avid nature lover.  There is even a boat tour through the “lodes”, which are small rivers that run through the swamp.  Species of plant are labelled as you walk through and even when we went in August there were flowers all along the trails.  There are even wild ponies that wander a portion of the reserve. 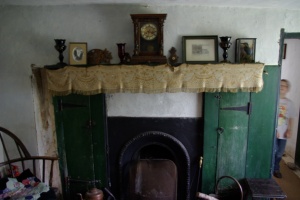 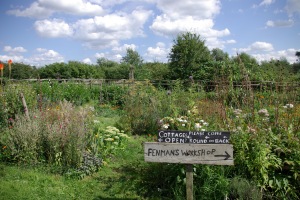 For those history buffs, there is even an old cottage that belonged to people who lived and worked along the fen.  There is even a demonstration of how they made furniture, and they let you try your hand at the contraption that they could carry from place to place that helped them to make the decorative cuts on the legs of tables and chairs.  The women who monitored the cabin and showed us through were wonderful in explaining to my children the different bits about the cabin, including that the children used to sleep in the upstairs which was little more than boards placed in the rafters.  The back flower and vegetable garden were beautiful and teeming with butterflies.

There is something for everyone to enjoy at Wicken Fen.  The entire family enjoyed the day and for those who don’t bring a picnic to eat along the trails, there is a tea shop by the gift store and a village nearby with pubs.

Next up…Stourhead!!  To quote Mrs Gardiner, “If it were merely a fine house richly furnished,” said she, “I should not care about it myself; but the grounds are delightful. They have some of the finest woods in the country.”

One thought on “Wicken Fen”